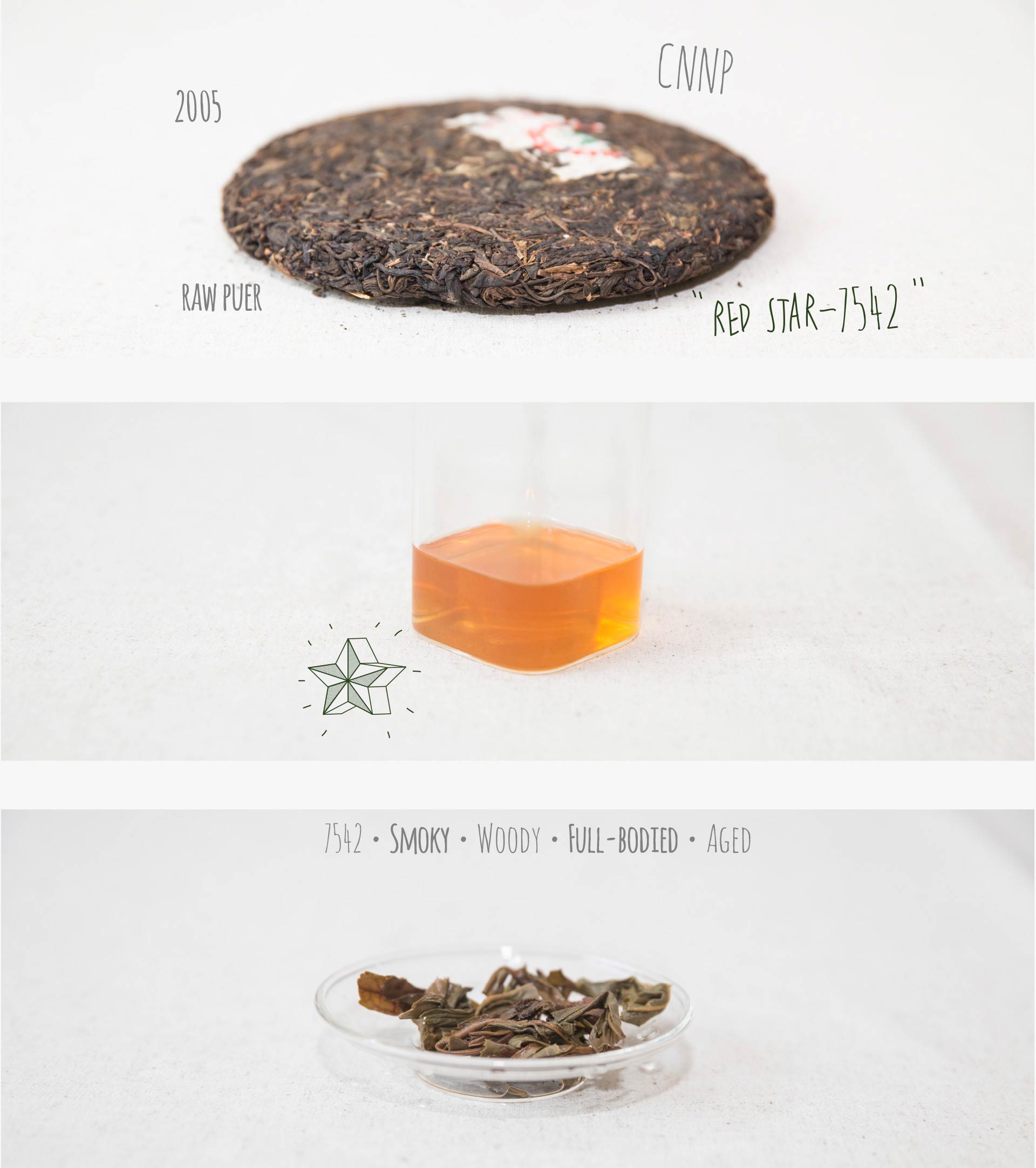 This Zhong Cha (CNNP) 7542 raw puer is a 10+ year aged animal. When we initially unboxed this, we expected a somewhat mellowed out tea after 10 years of storage, but this tea did its best to prove us wrong. The most noticeable qualities of this tea are a deep woody taste and campfire smokiness. This tea has an aggressive profile that rewards. Things start to level out more as you move into the middle steeps (6+), at which point some of the accompanying bitterness recedes into the background.

This tea represents a big contrast to most of the other raw puers we have offered so far, which tend to be more fragrant and sweet. We highly recommend this cake to those who are already enjoy a good scotch or cigar. Considering the price, this tea is an easy one to pick up for both drinking now and because of its great storage potential.

For something in between this 7542 and some of our other raw puers, we recommend our Dear Comrade 2007 Bulang Raw.

As one of the most recognizable labels out there, the 7542, or “green mark”, Zhong Cha cakes have a meaning behind those 4 numbers. The first two digits refer to the year the recipe was formulated (1975). The third digit is the average leaf grade, represented on a scale of 1-9, with higher numbers meaning bigger leaves (in this case 7542). The fourth digit specifies the factory of production, with 2 being the Menghai factory.

It’s worth noting that the original production factory (Menghai) has since re-identified as “Dayi” and went fully private in 1996. Meanwhile, the Kunming factory remained an official production factory for Zhong Cha. Even after the tea industry was privatized, tea under the Zhong Cha label with this style of wrapper have still been produced, but many factories simply purchased the rights to use the label (while many less than legitimate producers just forged it).

For certain periods in puer tea’s history, recipes can tell you a lot about how the tea will taste and its quality, but there have also been periods of inconsistency, among legitimate and not-so legitimate teas. We promote this particular tea based on its taste and quality, just as we would with any other production. As a famous recipe and recognizable cake, these types are also more susceptible to being faked. These particular cakes were purchased directly from a Zhong Cha employee in Kunming in 2006 and have been dry stored by one owner ever since. These are all cakes from the second batch of 2005 (batch 502).

Free Shipping on Orders Over $100 | While we will continue processing orders as normal throuch CNY, there may delays clearing customs between now and January 30th Dismiss

Do you want FREE Teaware?

Wait, you don't want free teaware? Are you sure?

All you have to do is join our mailing list - there's nothing to lose! You'll also be kept up to date with promotions and new teas and teaware: