Dian Hong. What is it and why should I drink it?

Dian Hong is a black tea and you should drink it because it’s delicious. That’s the short version at least. Dian Hong is actually black tea from the province of Yunnan. The Chinese characters are滇/Dian, which is both an older name for Yunnan and still used as a short version, and 红/Hong, which is simply “red”. Just to make things a little bit confusing, what we know as “black tea” in the west is actually called “red tea” in China. So whenever a Chinese tea label says red tea (红茶), it actually means black tea to us non-Chinese folk. Based on this short Chinese lesson, we now know that Dian Hong appropriately translates to “Yunnan Red”.

Dian Hong was “discovered” in 1938 during the Sino-Japanese war. Because black tea production close to the East coast of China was hindered by the Japanese invasion, China had to look elsewhere for production. Tea was a crucial export to help China obtain foreign support against the Japanese. At this point Feng Shaoqiu, a tea expert from the China Tea Trade Company and responsible for the popularity of Keemun black tea, was tasked with the mission of finding a new region for producing black tea. Sheltered in the Southwest of China, he discovered that the tea from Fengqing, Yunnan was an ideal area to start producing black tea for export. China wasted no time and began exporting Dian Hong in 1939.

What makes Dian Hong special is that it is produced from the large leaf variety tea tree indigenous to Yunnan. Dian Hong has a unique appearance thanks to the presence golden, strand-like tips in the tea. The end product is a sweet, fragrant and smooth, red- I mean, black tea with no noticeable bitterness or astringency. Of course these qualities also depend on the quality of the tea and the processing. As quality goes down, bitterness can increase. 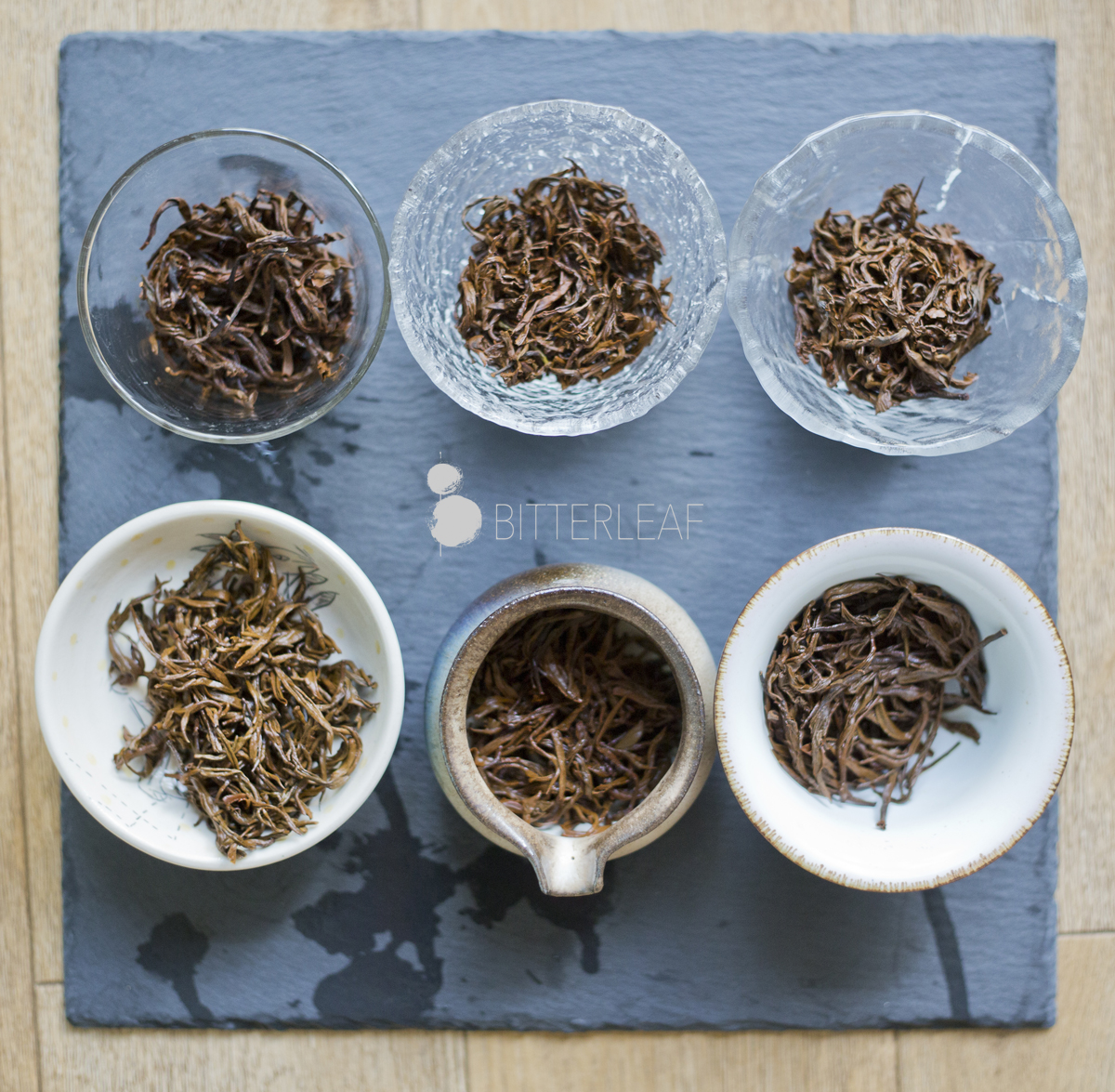 The remains of 6 different Dian Hongs after a tasting, including several old/ancient tree varieties.

In some cases you can also buy grades of Dian Hong that include only the golden buds. These are more delicate and sweeter than those that have a mix of leaf and buds, and usually more expensive too. Tea producers have recently began to experiment more in their methods of processing Dian Hongs in order to bring out the character of some of the ancient trees that are used. Some of the variations include spending a little more time roasting the leaves or finishing them by drying the tea in the sun instead of an oven.

While Puer tea still takes most of the glory for Yunnan these days, Dian Hongs are steadily becoming more and more popular. People just need to give them a chance. Brewing style will vary from tea to tea. Lower quality Dian Hongs may be best off steeped in a pot or cup, while some higher quality ones can endure a gongfu brewing session lasting several infusions. Personally, the latter is the type of tea I’m after. These are also the same ones that will be smooth and sweet, and won’t leave behind any bitterness.

This post has been brought to you by a tall glass of cold brewed Dian Hong.

CNY Shipping Notice: Orders received before January 23rd (China time) will be sent out as normal. After this, orders can still be placed, but there will be slight delays until January 30th.⁠
⁠
And because we love you more than the other China-based tea vendors, will be working hard to send them out and continue to have regular China Post pickups. However, the bottleneck is due to the fact that Chinese Customs officers will be enjoying a 7 day break, so don't be surprised if the tracking hits a dead end at Guangzhou for a few extra days.⁠
⁠
Nonetheless, it's a very short shipping break, and we may even have a few temptations to unleash over the CNY break, like these gaiwans. ...

640 28
Open
Unfortunately, life in Kunming for @imcoomi and I

Unfortunately, life in Kunming for @imcoomi and I means a life deprived of snow (except for that one time it snows for 2 hours every 5 years). Unable to enjoy the winter activities we could enjoy in our previous life, we've had to settle for our own ceramic snow friends.⁠
⁠
These ones might be even better, especially as they don't melt when you pour tea over them.⁠
⁠
Also, helluva gaiwan, isn't it? ...

430 7
Open
Lucky Bags! Delivered by cats!⁠ ⁠ Before we cl

Lucky Bags! Delivered by cats!⁠
⁠
Before we close out the Year of the Pig, a little spring cleaning is in order. This is customary in China as it's considered a bad move luck-wise to clean during the several days after the CNY. Chinese traditional equates throwing out garbage and waste with throwing out money in the first days of the lunar new year.⁠
⁠
After several years, I'm still wrapping my head around that a bit, but abiding by the custom nonetheless. This means that our pre-spring festival cleaning has turned up way more random tea than we need!⁠
⁠
Each lucky bag contains various teas that could include raw or ripe puer, dancong, yancha, cha gao, white tea, black tea, yellow tea, orange tea, neon hot pink tea, Ice-T, and all kinds of random things. Some teas are very high quality, while others are... tea.⁠
⁠
But for as little as $5, it's hard not to play the game. ...

Doing a little side by side storage comparison after almost 1 year.⁠
⁠
We honestly weren't sure what to expect. The comparison was between Jianshui clay jar storage and woodfired (Sublime) jar storage. Both jars were filling to the brim with our 2018 Year of the Dog Yiwu. ⁠
⁠
The earlier years of a tea's storage see the most drastic results, so it's an ideal time for conducting a comparison. For the most part, the temperature and humidity were never more than a few degrees different, but even after a relatively short amount of time, there is still a slight difference. ⁠
⁠
Let's see what year 2 has in store. ...

There's still a week before the Chinese New Year and before we officially enter the Year of the Rat. These guys already seem to feel quite at home with us in our studio, which is no surprise considering Bitterleaf is proudly 100% Rat owned and operated. No wonder our cats enjoy playing with us so much.⁠
⁠
If you're now determining our age based on zodiac, then yes, we're 24 years old this year. Or sometimes 12 years old, if going by maturity. ...

Free Shipping on Orders Over $100 Dismiss